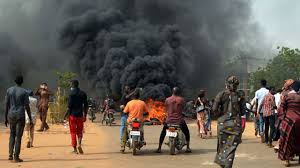 The Kaduna state government has imposed a dusk to dawn curfew in Kajuru local government area of the state where there has been a series of attacks recently.

A statement by the spokesman of the state government, Samuel Aruwan, says
Security assessments have necessitated the imposition of a dusk to dawn curfew in all parts of Kajuru Local Government Area, effective from today, Wednesday, March 13, 2019.

According to Mr. Aruwan, the dusk to dawn curfew is also extended to Kujama and Maraban Rido, which are located in Chikun Local Government.

He further States that the curfew in the affected areas will be from 6 pm to 6 am daily, until further notice.

The government has directed Security agencies to ensure strict enforcement of the curfew and however appealed to all residents and communities in the affected areas to bear with the inconveniences.