OMO AGEGE RESTATE THE VALIDITY OF HIS RE-ELECTION 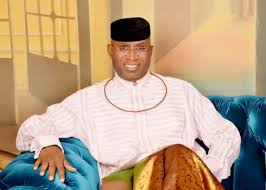 He restated that his re-election was valid.

Omo-Agege, who re-contested the senatorial seat on the platform of APC faction led by Erue, said his re-election remains valid and legitimate.

Omo-Agege, who represents Delta Central Senatorial District, said in a statement by Godwin Anaughe, his Senior Special Assistant, Communications and Strategy, in Abuja.

Bestiaries Gladiators reports that the Court of Appeal, Benin, had on March 29, upheld the earlier judgment delivered by the Asaba Federal High Court which nullified the Jones Erue-led APC state executive committee.

Omo-Agege and Rev. Francis Waive had earlier filed an application seeking the leave of court to join as parties to the appeal, on behalf of themselves and other candidates of the APC, against the judgment of the Asaba court.

Reacting, the lawmaker said it was instructive to note that the ruling delivered by the Court of Appeal only struck out the application on the ground that they cannot appeal the judgment as individuals since they were both members of APC who can appeal the judgment on their behalf.

According to him, the APC has already filed an appeal against the judgment.

Omo-Agege, who said that the Benin Appeal Court “has not and did not determine the appeal filed before it by the APC”, reiterated that the consent judgment delivered by Justice A.I. Chikere of the Abuja Federal High Court was still valid and subsisting.

“And all the recent happenings in court have neither invalidated nor set aside the consent judgement.

“Therefore, the Prophet Jones Erue-led Exco remains the authentic and legitimate APC Executive Committee of Delta, so also are all the candidates of APC in the just-concluded 2019 General Elections,” he said.

According to him, it is settled law that a court cannot make a finding that will be prejudicial against a person that is neither before it nor a party to the case and cannot in the same vain grant a relief which will affect a person who is not a party in the suit.

The status of all the candidates of the APC in Delta for the 2019 General Elections remains valid and legitimate,” Omo-Agege argued.