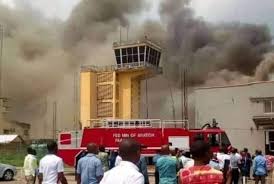 Passengers and Staff at the Sam Mbakwe Cargo Airport were thrown into confusion on Monday afternoon as fire broke out on the arrival section of the Airport.

The cause of the fire was not known as at the time of filling this report but a source at the Airport said that there was ongoing renovation at the arrival hall, which was totally razed.

Reports say the inferno, which raged for about one hour, started around 2:10 p.m.

It took the efforts of men from the Fire service and airport workers to put off the fire.

“It was a mysterious fire outbreak. It happened at the arrival section of the airport where the authority was carrying out renovation work.

“It would have caused bigger havoc but for the arrival of men of the fire service.

“It started around 2:10 p.m., and raged for 50 minutes. It damaged equipment and infrastructure but people assisted in savaging the situation.”

When contacted the Police spokesperson in the state, Orlando Ikeokwu, said that he has not being officially briefed.

Yakubu said the fire started at about 2.00p.m but was however, curtailed swiftly by officers of the Aerodrome Rescue and Fire Fighting Services Department of FAAN.

“There was no casualty and normal operations has since resumed at the airport.

“The authority has commenced preliminary investigations into the cause of the incident,” she said.

Yakubu said that FAAN was committed to its core values of safety, security and comfort.