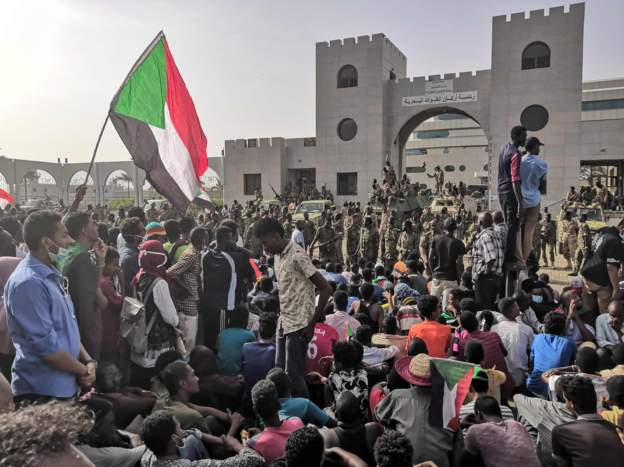 Sudanese sources have told the Saudi-funded, pan-Arab Al Arabiya TV that political prisoners have been released as the country awaits a key announcement from the army.

In a breaking news caption at 08:50 GMT, the channel quoted sources as saying “all political prisoners are releases in Sudan”.

This comes after reports that the army would make a key statement. Sudanese state media are playing patriotic music.

News has also emerged that current and former officials have been arrested.

Since 6 April, thousands of anti-government protesters have been taking part in a sit-in in front of the army headquarters in the capital, Khartoum, calling for President Omar al-Bashir to step down.

The group at the forefront of the demonstrations against President Omar al-Bashir urged the people “not to attack” government and private properties, reports AFP news agency.

“We are calling on our people to control themselves and not to attack anybody or government and private properties,” the Alliance for Freedom and Change is quoted as saying in a statement.

They are still waiting for a key announcement from the army. It was promised more than six hours ago and is expected to be announced on State radio, which you can listen to online.