The Canadian government has condemned the report that it is requesting one million Nigerians to relocate to the country.

The High Commission of Canada to Nigeria faulted the report in a series of tweets on Tuesday.

This followed the emergence of the report titled, “Canada’s Prime Minister begs Nigeria President for one million immigrants” which left many Nigerians asking a series of questions.

In its reaction, the Canadian embassy urged Nigerians not to fall for the report, saying it was too good to be true.

It, however, directed Nigerians to its website for authentic information about travelling to Canada.

The embassy disclosed that no fewer than 4,200 Nigerians were approved for permanent residency in Canada in 2017.

It explained that the figure was almost double the number of the permanent residency approved in the year prior, stressing that Nigerians in Canada make important contributions to both countries.

Read the tweets below: 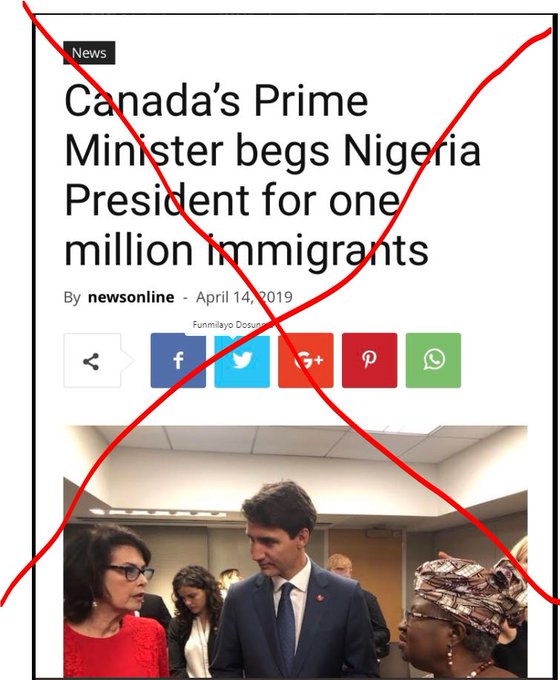 If you’ve seen this link on your social media timeline, don’t fall for it. This story is not true. For REAL information about travelling to Canada, go to http://www.cic.gc.ca .

Over 4,200 Nigerians were approved for permanent residency in Canada in 2017, which is almost double the number from the year prior. Nigerians in Canada make important contributions to both countries.

43 people are talking about this

If you see a story online about moving to Canada that seems too good to be true – shine your eyes well-well o!!! @PremiumTimesng @MobilePunch @vanguardngrnews @daily_trust @HOTFMNIGERIA

62 people are talking about this

Oh, just when i thought my dream was about to come through

But incase una need boys eh, I’m a professional salesman and a Petroleum Engineer with lots of experience to offer

Lol Canada why? I am already making plans to come over

They will still carry only me oo

I love this your handler