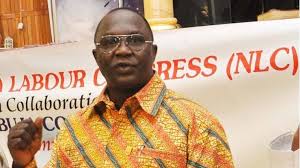 The President of the Nigerian Labour Congress (NLC), Mr Ayuba Wabba, says the new minimum wage recently signed by President Muhammadu Buhari, is binding on all employers of labour in the country.

Wabba stated that only employers whose workers are less than 25 can be exempted from the monthly N30,000 salary payment.

Wabba, however, decried the varying salary structure of the public and civil service, calling for a guide to uniform the system.

While citing the law, Wabba called for an increase in the payment of pensions and gratuity to retired Nigerian workers.

“It (minimum wage) goes side by side with pensions. The Constitution says anytime there is an increase in the minimum wage, automatically pensioners should also benefit.

“We have as at today some pensioners receiving as low as N5,000 monthly pension. Certainly, we know that nobody can live these days on N5,000.”

Speaking on defaulting employers who fail to meet up pay the minimum wage, the labour leader said penalty would be slammed on them in accordance with the law.

He also explained that the figures can be reviewed for increment on a 5-year basis owing to inflation of the nation’s economy among other issues.