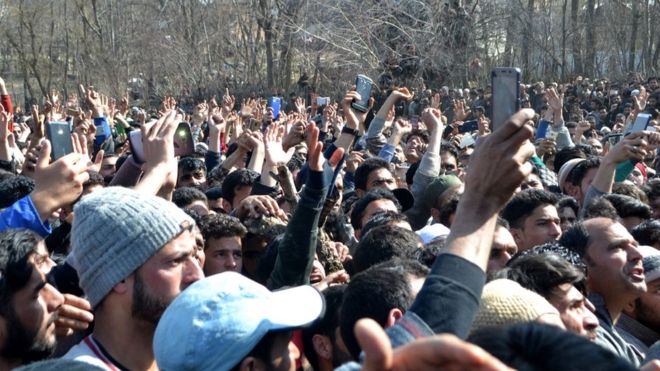 Zakir Musa, described as “India’s most wanted” militant, has been killed in Indian-administered Kashmir, the army has confirmed.

The army said that he was shot dead after they trapped him inside a house in south Kashmir’s Tral district.

Musa split from the Hizbul Mujahideen, one of the largest groups fighting Indian rule in Kashmir, and declared his allegiance to al-Qaeda in 2017.

His killing has already brought protests in the Muslim-majority state.

Zakir Musa, whose real name is Zakir Rashid Bhat, was a close aide of Burhan Wani, a charismatic Kashmiri militant leader, whose killing by security forces in 2016 sparked widespread protests. More than 100 civilians lost their lives during four months of clashes with security forces in the Kashmir valley that year.

Local media have said that Zakir Musa’s death is the “biggest victory” for the Indian armed forces since the killing of Wani.

It is unclear how many fighters were in his Ansar Ghazwat-ul-Hind group.

Kashmir-based journalist Sameer Yasir told the BBC that officials are braced for violence following the confirmation of Zakir Musa’s death.

However, with news of the killing trickling out, unrest has already started, he says.

“Protesters have clashed with police at many places since morning. Many people shouting ‘Musa Musa Zakir Musa’ also gathered at the only highway that connects Srinagar with the rest of India and threw stones at forces. The police have been retaliating with tear gas shells and pellet guns,” Mr Yasir added.

Mobile internet services have been suspended and a curfew imposed in the region. Schools and colleges have been asked to remain closed on Friday.