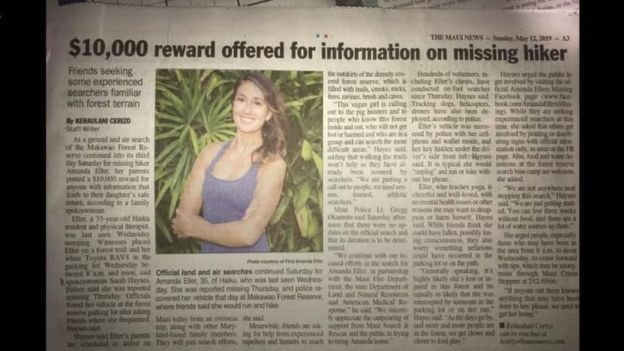 A woman has been found alive more than two weeks after she went missing on Maui, Hawaii.

Amanda Eller, 35, was last seen on 8 May. Family and friends had launched an intense search effort and offered a cash reward for her safe return.

Ms Eller was found on Friday when she waved down a rescue helicopter.

Reports say she got lost and injured while hiking in the area. Photographs show her dirty and slightly injured, but smiling after being rescued.

On one video, taken at a local hospital, Ms Eller’s father said he was “bawling like a baby” when his daughter was found.

Her mother described her as being in “surprisingly good shape” considering how long she had been missing.

Local reports suggest she has lost weight, but survived after foraging on berries and local water sources.

An online announcement about her rescue on the “Find Amanda” Facebook page has now been shared and liked thousands of times.

Well-wishers have been flooding the page with messages of shock and relief about Ms Eller’s safety.

Her mother, Julia, told local news website Khon 2 that she had always “felt in her heart” that her daughter was alive.

“I never gave up hope for a minute,” she said. “Even though at times I would have those moments of despair, I stayed strong for her ’cause I knew we would find her if we just stayed with the program, stayed persistent and that we would eventually find her”.