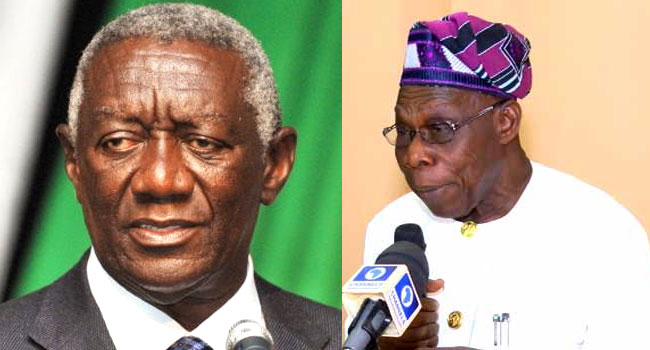 Former President Olusegun Obasanjo and his Ghanaian counterpart, John Kufuor have asked the African Union (AU) and the Economic Community of West African States (ECOWAS) to intervene in the crisis rocking the Benin Republic.

Both leaders made their position known in a joint statement released on Thursday by Obasanjo’s spokesman, Kehinde Akinyemi in Abeokuta, the Ogun state capital.

According to them, there was a need for the intervention in order to avoid escalation of the festering political crisis.

“The crisis in Benin calls for urgent action by ECOWAS and African Union (AU) to avert the escalation of the festering political unrest.”

The former leaders believe that the country’s ongoing political crisis if not properly handled could worsen the security and humanitarian situation.

“We are of the view that all stakeholders should be carried along in the electoral process. In addition, the ongoing political crisis appears to be worsening the security and humanitarian situation which might open a floodgate to terrorist incursion that will lead to further destabilisation of the West-African sub-region, the statement read in part.”

They also want African leaders to rise to their responsibility by urgently intervening with a view to putting pressure on the incumbent administration to play the games of democracy by the rules.

The former leaders urged the AU and ECOWAS to send a strong delegation to appeal to President Talon to release his immediate predecessor who needs medical attention abroad.