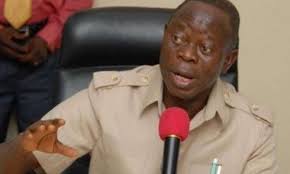 The All Progressives Congress (APC) has condemned the situation surrounding the inauguration of new State Houses of Assembly in Edo and Bauchi States.

The ruling party in a statement signed by the National Publicity Secretary, Lanre Issa-Onilu described the situation in both states as ‘a joke and an embarrassment.’

APC said democracy must be governed by the rule of law and the situation in both Edo and Bauchi is ‘illegality which they have viewed with shock and disappointment.’

“We viewed this illegality with shock and disappointment. As a party that has made a commitment to change, we strongly reject any attempt to take recourse to brigandage of the past, when democratic practices were defined by the inordinate whims of people in power.

“Practices like this are unacceptable under APC-led administration. As a party that is committed to higher ideals, we would use all democratic means necessary to ensure the right thing is done.

“Perhaps the actors in the inauguration sham in Edo and Bauchi States need to be reminded of the recent and widely-commended election of presiding officers in the newly-inaugurated 9th National Assembly. Our party has set new standards in party politics by upstaging the rule of force while upholding the rule of law.

“It needs restating that every elected lawmaker has a legitimate right to participate unhindered in the inauguration of the legislative arm in which he belongs. The plot to arm-twist the majority in favour of the minority in the legislative arm died with the defeat of the PDP in 2015,” the statement read in part.

APC then called on the Governors of Edo State, Godwin Obaseki and Bauchi State, Bala Mohammed to urgently issue a proper letter of proclamation to allow lawful inauguration of the respective state House of Assembly and subsequent election of presiding officers in a transparent manner.

The ninth Edo Assembly INAUGURATE 9 OUT OF 24 ELECT AT NIGHT, with nine members electing Frank Okiye as Speaker of the House.

The assembly has 24 members-elect.

19 aggrieved lawmakers had earlier addressed a press conference where they claimed that the governor was trying to impose the leadership of the house on members.

A similar drama played out in Bauchi on Thursday when 11 out of 31 lawmakers of the ninth Bauchi state house of the assembly elected a new speaker.

18 members of House later held a parallel election in front of the Assembly complex after they were denied entrance into the chamber as it was locked.

The 18-members elected Damina a former Speaker in the 8th house of Assembly and a member of the APC.

He was returned in the parallel election through a voice vote.