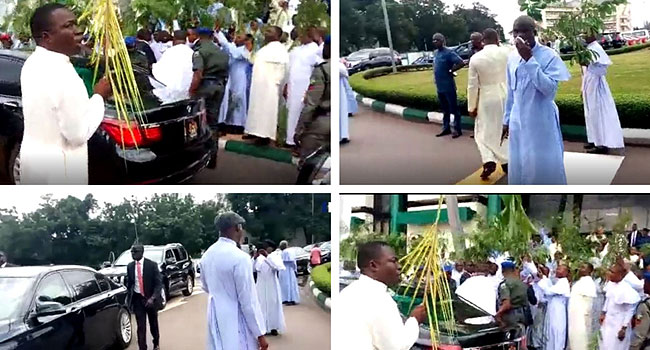 Governor Ifeanyi Ugwuanyi of Enugu State, heads of security agencies, religious leaders and other relevant stakeholders in the state, rose from an emergency security meeting at the Government House, Enugu, condemning in its entirety the killing of the Parish Priest of St. James, The Greater, Ugbawka in Nkanu East Local Government Area of the state, Rev. Fr. Paul Offu.

The priest, according to reports, was shot dead along Ihe-Agbudu Road in Awgu Local Government Area by yet to be identified hoodlums.

Gov. Ugwuanyi upon receiving the unfortunate news of the incident summoned an emergency security meeting at the Government House, Enugu, which was attended by all the security agencies in the state, Archbishop Emmanuel Chukwuma of Enugu Ecclesiastical Province (Anglican Communion), representative of the Catholic Bishop of Enugu Diocese, Rev. Fr. Dr. Nnamdi Nwankwo, among others.

Briefing journalists on the outcome of the meeting, the State Commissioner of Police, Suleiman Balarabe, stated that they “condemned in totality the dastardly act and we all prayed that his soul rest in peace”, adding that the governor mandated the security agencies to fish out the perpetrators of the heinous act.

Balarabe disclosed that the state government resolved to have air surveillance in all the flashpoint areas, stressing that the exercise will commence on Monday, August 5.

The police commissioner added that the meeting resolved that the security architecture of the affected areas will be reviewed with immediate effect.

He said that the meeting observed with deep concern the proliferation of dangerous arms in the state, stating that those in possession of illegal weapons have been given three days to submit them to the police “and after which anybody found with illegal weapons will be dealt with in accordance with the law”.

Balarabe revealed that in keeping with the outcome of the recent meeting of the South East Governors Forum, the Enugu State Government resolved at the emergency meeting to employ the services of Forest Guards and equally strengthen the services of the Neighborhood Watch groups in the state.

In his remark, Archbishop Chukwuma, condoled with the Catholic Church over the sad incident and appealed to the Inspector General of Police to increase the number of policemen in the state, saying “they are inadequate”.

ALSO RREAD: SENATE PRESIDENT FELICITATE WITH OMO-AGEGE AS HE CLOCKS 56

The Archbishop insisted that “Enugu State is safe and secure for everybody”, stressing: “We are very much behind the government of Enugu State and we are commending the efforts of the governor and the state government in their efforts to make sure that lives and property are secured in Enugu State”.

According to him, “we are not afraid and nobody should think that he can get Enugu State into a state of violence or insecurity”.

Commending Gov. Ugwuanyi for his prompt action in summoning the meeting, Archbishop Chukwuma said: “I think the governor and the security agencies are out to make sure that anybody who goes after priests or human beings again in Enugu State will have himself or herself to blame”.

Speaking on behalf of the Catholic Church, Rev. Fr. Nwankwo, stated that “the Catholic Diocese of Enugu wishes to thank the governor for his quick response to this sad incident that has taken place in this state”.

The priest said that “some people are trying to sabotage the efforts of the state government and the popular saying, which is true, that Enugu is safe”, noting that “we are sad”.

His words: “We have come here to dialogue with the governor and the state security agencies and I am very much impressed with the outcome of this security meeting and all the resolutions taken.

“I am particularly interested, that the Miyetti Allah and other Northern groups have been helping the governor in security issues and discussions. I am particularly impressed; however, we are asking them to do more because we don’t want to live in fear.

“So, we thank everybody, we thank especially the governor. We know what he is going through, we know the pressure, and this state is the ideal state for peace in the whole nation, and we encourage him not to be distracted, relent or in any way give up his efforts. Rather, let these things happening encourage him to work harder. He is the father of the state and as he has given some directives today. I am impressed, and may God bless our Governor.

Earlier, the Enugu State Government had condoled with the family of the late Rev. Fr. Offu and the entire Catholic Diocese of Enugu over the painful death.

In a statement by the Secretary to the State Government, Prof. Simon Ortuanya, the state government noted that the priest’s death “represents another ugly manifestation of security challenges in the entire country- East, West, North and South”.

The state government in the statement summoned a crucial meeting of all local vigilante and Neigbourhood Watch groups with the governor at the Government House, Enugu, on August 5 at 1pm.

It also notified the public of planned air surveillance by the Nigerian Air Force along Ihe –Agbudu axis, Awgu, Aninri, Nkanu East Local Government Areas and their environs and enjoined citizens not to panic in the course of the exercise.