INEC WITHRAWS ALL POWERS FROM REC WHO RESIGNED TO JOIN POLITICS

INEC’s National Commissioner and Chairman of Information and Voter Education Committee, Mr Festus Okoye, announced this in a statement on Friday in Abuja.

The statement was issued a day after Dr Briyai addressed reporters in Calabar, where he declared to contest for the governorship election in Bayelsa State.

He had also announced his resignation as a Resident Electoral Commissioner, saying he would run on the platform of the All Progressives Congress (APC) in the November 16 poll.

Okoye, however, said INEC has yet to receive any resignation letter from the REC, in line with the provisions of the Constitution.

According to him, Dr Briyai failed to follow laid down procedure for resignation as such can only take effect on receipt of the resignation letter by the appointing authority.

The National Commissioner also condemned the use of the premises of the electoral body for expression of political interest, saying it was unlawful.

He, therefore, noted that INEC’s administrative secretary in the state has been directed to take over the responsibilities of the REC until further notice.

Read the full statement from the electoral umpire below:

The Resident Electoral Commissioner, Cross River State of INEC, Dr Frankland Briyai yesterday addressed the media to the effect that he has resigned his position as REC with effect from August 8, 2019, and joined a political party on whose platform he intends to contest the November 16, 2019 governorship Election in Bayelsa State.

Although this was done at the commission’s Cross River State office in Calabar, the commission is yet to receive any communication on this from Dr Briyai.

The commission strongly frowns at the REC’s expression of partisan interest. We note that the Constitution precludes National and Resident Electoral Commissioners from belonging to political parties.

Also, the use of INEC premises and facilities for such declaration or for any political purpose is unlawful and contrary to the Code of Conduct subscribed to by all INEC officials.

Dr Briyai failed to follow laid down procedure for resignation as REC. Section 306(2) of the Constitution of the Federal Republic of Nigeria 1999 (as amended) provides that the resignation of such appointment takes effect on receipt of the letter of resignation by the appointing authority – in this case, the President.

We are not aware that he has tendered his resignation to the appointing authority and the commission has not received any resignation letter as he claimed.

Following his actions and based on the constitution, the commission has withdrawn all powers and functions delegated to Dr Briyai as Resident Electoral Commissioner.

Consequently, the Administrative Secretary of INEC Cross River State has been directed to oversee the office and take over the functions and duties of the REC until further notice. 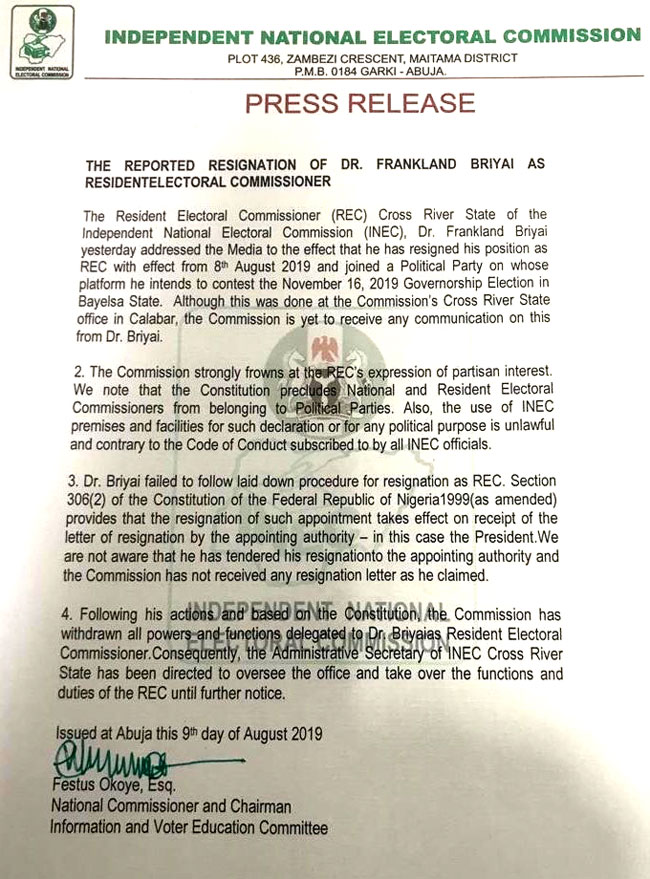