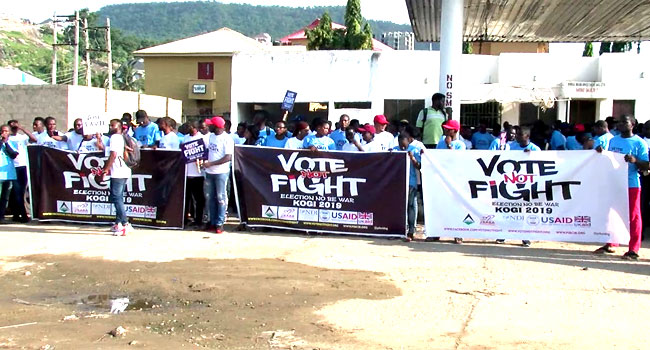 Youth in Kogi State have vowed to ensure a free, fair, and credible exercise ahead of the November 16 governorship election in the state.

They also said they have resolved to support a peaceful process that would lead to electing a competent candidate who would transform the state economically and politically.

The youths staged a march on Wednesday tagged, ‘Vote Not Fight; Election No Be War,’ as part of activities lined up for the celebration of 2019 National Youth Day in Kogi State.

They stressed the need to sensitise the public against violence during and after the governorship election as they staged a peaceful protest walk within Lokoja metropolis.

The youths drawn across the 21 Local Government Areas of the state came together and asked residents to flee from any act of violence during the poll.

ALSO READ: NIGERIAN TEENS TO TAKE OVER NOLLYWOOD WITH SMARTPHONES

They walked from the Ganaja junction down the town to the headquarters of the Independent National Electoral Commission (INEC) in the state capital.

There, they handed over a five-point demand to the representative of the Resident Electoral Commissioner (REC), while the coordinator appealed to INEC to remain unbiased during the election.

In his response, INEC’s Director of Voters Registration and Publicity, Mr Ahmed Biambo, said the electoral body was determined to create a level playing ground for all the 91 registered political parties to contest the governorship election.

The youths also took their sensitisation to the Police Headquarters in Lokoja, and they were received by the Commissioner of Police, Mr Hakeem Busari.

Mr Busari who also received the letter containing the demands by the youths promised to support their course for a better election.