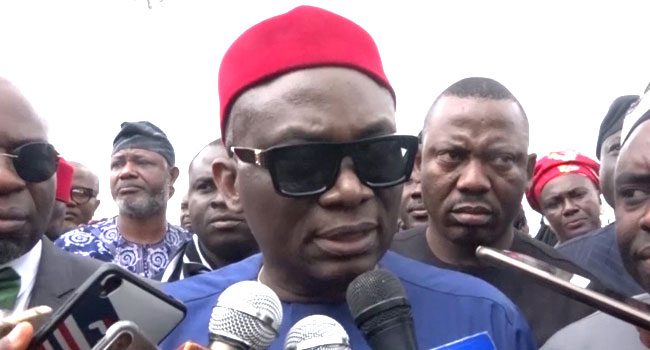 The Minority Leader of the House of Representatives, Ndudim Elumelu, has continued to react to his suspension by the Peoples Democratic Party (PDP).

Elumelu who said he was not disturbed by the suspension expressed confidence that the issues would be resolved soon.

He spoke at an event organised by the members of the Aniocha/Oshimili Federal Constituency on Friday in Asaba, the Delta State capital.

The lawmaker also reacted to the killing of Nigerians in diaspora, especially the cases recorded recently in South Africa.

He, however, advised Nigerians in distress in foreign countries to come home with an assurance that the National Assembly in collaboration with the Federal Government would work hard to put a stop to the menace.

Elumelu promised to use his office to initiate stronger policies that would help grow the Nigerian economy and create an enabling environment for the development of the nation, with emphasis on infrastructural development.

The suspension of the lawmaker could not deter the people of the constituency to welcome their representative at the National Assembly as he was received by a crowd of people.

It is the first time Elumelu will be visiting his hometown since his inauguration as the Minority Leader of the House.