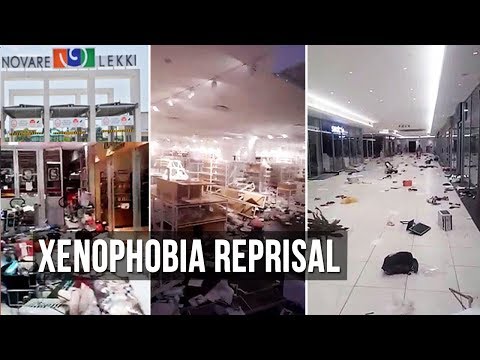 Details about the level of damage done by angry Nigerians protesting against the fresh Xenophobic attack on Nigerian businesses in South Africa has continued to emerge.

Amid the outrage that followed the violence, many Nigerians joined protests back home against South African businesses in the country, with the protests turning violent in some parts of the country and resulting in the destruction and looting of shops.

The Novare Mall in Lekki, Lagos, which houses a Shoprite store and other businesses believed to be South African, as well as Shoprite in Surulere were among the places attacked and looted by angry Nigerians on Tuesday.

Today, one day after the reprisals, which has been condemned by the Federal Government, videos have emerged, showing the level of looting and destruction at the mall.

The video showed the chaotic scene left behind by the attackers. What is known to be a clean, and organised mall with colourful stores and all manner of goods from luxury items to everyday products, was reduced to scenes fitting in an apocalyptic movie; smashed doors and glasses with all manner of goods strewn all over the floor.

The unidentified individual who recorded the video and others apparently with him could be heard expressing shock at the level of looting and damage done to shops at the mall.