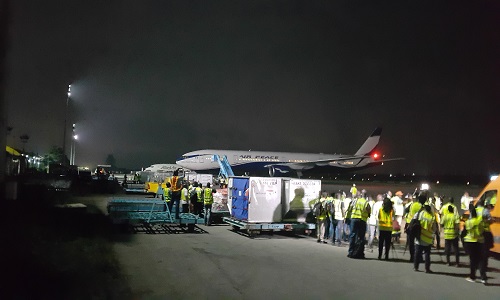 The Air Peace flight MEN2759 conveying 188 Nigerians from South Africa has arrived at the international wing of the Murtala Muhammed International Airport (MMIA) in Lagos at 9:35 pm local time.

The aircraft which departed the OR Tambo International Airport in South Africa, after an eight-hour delay, had on board, 188 Nigerians.

The evacuation of Nigerians follows an order by President Muhammadu Buhari on September 9, 2019, to evacuate Nigerians who are willing to return home from South Africa, after several xenophobic attacks on foreign nationals, including Nigerians.

The President gave this order after he received the report of the special envoy sent to South Africa to convey a Special Message to President Cyril Ramaphosa over the recent xenophobic attacks in the country.

While some people were turned back over inadequate documentation for travelling with children, about seven were detained for allegedly entering the country illegally