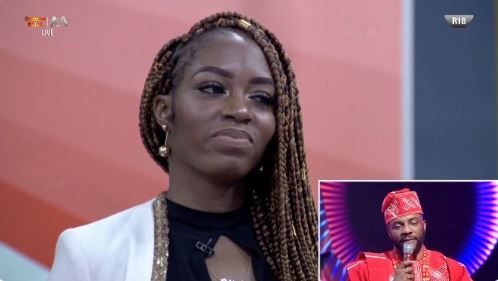 Khafi Kareem has been evicted from the Big Brother Naija house.

Her exit is coming after spending 77 days and nine weeks in the House.

While in the house, the 29-year old won the Innoson vehicle valued at N3.85 million and a 220,000 Scanfrost TV during the Scanforst challenge.

Khafi, speaking on stage after her eviction, thanked everyone for supporting her during the show.

She also said Gedoni was naive by being overly friendly with other girls, while in the house. She further told everyone that she is “now good with Seyi”.

Ten housemates are left in the show, contesting for 60 million naira. They are, Omashola, Tacha, Mercy, Diane, and Frodd.

Others are Cindy, Elozonam, Mike, Seyi and Ike