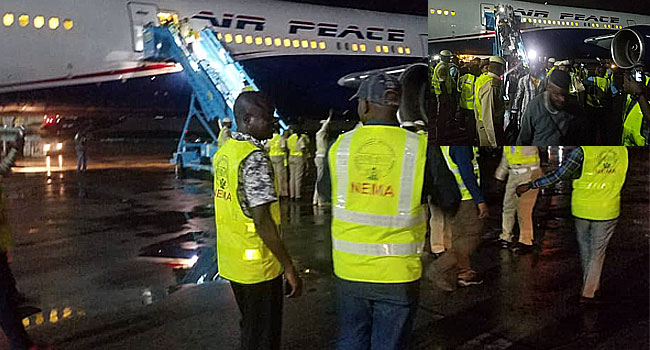 The second batch of Nigerians being evacuated from South Africa have arrived in Lagos.

The 314 returnees and the Head of Immigration and Consular Matters at Nigeria’s Consulate General in Johannesburg, Mr. Anthony Ogbe, had boarded the Air Peace flight and left South Africa around 3:00 pm on Wednesday.

They arrived at the Murtala Muhammed International Airport around 7:20 pm and are currently waiting to be profiled by the immigration.

About 319 Nigerians were initially billed to return on Tuesday in the wake of xenophobic attacks in South Africa.

But their flight was delayed as a result of the airline not obtaining a landing permit on time.

Of the expected passengers, four were later dropped over documentation issues.

Prior to their return, a first batch of 187 Nigerians had been voluntarily evacuated and profiled according to their states.

Meanwhile, the Managing Director and Chief Executive Officer (CEO) of the airline, Allen Onyema has been recognised for the gesture of using his aircraft to evacuate Nigerians for free.

The lawmakers invited Onyema to the Green Chamber where he was given a rousing welcome, as well as a standing ovation.

He was also recommended for a national award.

In his remarks, the Air Peace Chairman thanked the lawmakers for the honour, adding that his actions were spontaneous and he would do anything to evacuate even a single Nigerian.

“I did not do it spontaneously, nor did I do it for publicity, I had to mortgage my landing right in South Africa because I just got the landing right before the crisis.

“I did not give a damn, I never did, because I know that I will not go to heaven with any dime.

“I have never been so honoured in my life. You have brought tears to my eyes. I would not have been able to do this if the Federal Government did not allow me or assemble those people for me to evacuate,” he said.