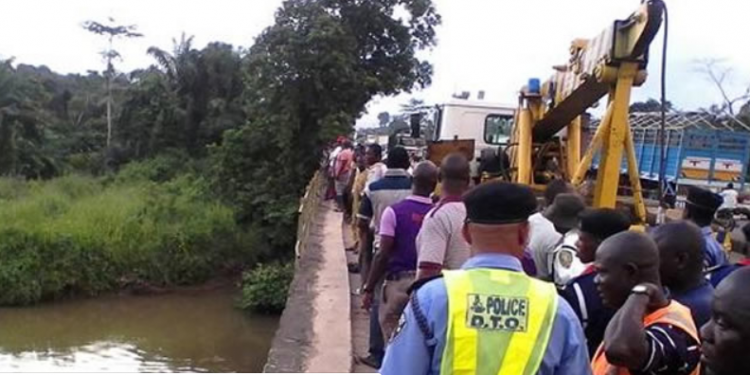 Many persons have been feared killed after a passenger bus plunged into River Ososa in Ijebu-Ode, Ogun State on Wednesday evening.

It was gathered that the incident occurred around 4:30pm while the bus with yet to be specified number of passengers was travelling on the Sagamu- Ijebu Ode-Benin Expressway.

The Nation reports the unfortunate accident occurred barely a week after a non-academic staff bus of Tai Solarin College of Education (TASCE), Ijebu Ode plunged into the same river.

At the time of the report, divers and rescuers were still battling to save occupants of the vehicle which was said to have lost control before flipping into the river.

It was gathered that the bus driver had attempted to overtake another vehicle on the road but suddenly had a bad tyre causing it to fall into the river.

Confirming the incident, Ogun Sector Command of the Federal Road Safety Commission (FRSC) said it was as a result of over speeding.

He said: “The FRSC rescue team moved in immediately to the scene for rescue operations. The team include FRSC professional divers who have dived into the river to conduct rescue operations underneath

“The divers are still working hard to recover the passengers in the ill-fated  vehicle, which is made more difficult due to the risen level of the river caused by yesterday’s heavy rains, around Ijebu-Ode area.

“The bus was travelling from the  Sagamu end of the expressway towards Ijebu Ode section.”

Expressing worry over the incidents, Oladele appealed to motorists to drive cautiously especially around bridges, considering that the expressway was undergoing rehabilitation.

“Motorists are therefore strongly advised to reduce speed when approaching bridges to prevent unpleasant situation such as this.

“The rescue operations would not be called off till the vehicle and the occupants are brought out of the river.

“I also appeal to RCC to ensure that the safety railings around the bridge and other bridges in that axis are quickly replaced.

Illuminated warning signs should be provided around the bridge and the depression at the foot of the bridge quickly repaired to prevent re-occurrence,” he said