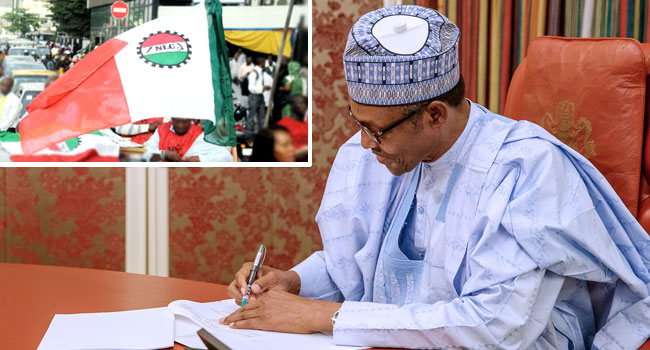 The leadership of Organized Labour in Nigeria comprising the Nigeria Labour Congress (NLC) and the Trade Union Congress (TUC) have given the Federal Government two weeks to implement the new minimum wage of thirty thousand naira or risks a nationwide industrial action.

In a statement signed by the president of the two unions, the labour leaders accused the government’s negotiating team of complacency.

The statement insists that the delay in implementing the consequential salaries adjustment is caused by the government.

The workers’ unions demanded a reconvening of the negotiation meeting before October the sixteenth, as they can no longer guarantee industrial harmony after the deadline.

Below is the full statement signed by the two unions.

“NEED FOR URGENT INTERVENTION ON THE STALLED NEGOTIATION OF CONSEQUENTIAL ADJUSTMENT OF SALARIES ARISISNG FROM THE NEW NATIONAL MINIMUM WAGE OF N30,000 PER MONTH TO AVERT INDUSTRIAL CRISIS

The leadership of Organized Labour in Nigeria comprising the Nigeria Labour Congress (NLC) and the Trade Union Congress (TUC) met today, 2nd October, 2019 with the Joint National Public Service Negotiating Council (JNPSNC-Trade Union Side) at the Labour House, Abuja.
The sole agenda of the meeting was to receive briefing from JNPSNC and to discuss the way forward on the deadlock in negotiations for consequential wage adjustment for workers in public service arising from recent enactment of the new national minimum wage of N30,000. Subsequently, the meeting went into very extensive deliberations around the following concerns;
Organized labour has out of its patriotic disposition demonstrated a great deal of restraint, consideration and patience with government. In the course of negotiations for consequential salary adjustment, organized labour had to moderate its initial position of having 66.6% upward salary adjustment for workers on salary grade level 07 – 17 by accepting an upward adjustment of 29% for officers on salary level 07-14 and 24% adjustment for officers on salary grade level 15 – 17. Despite this patriotic gesture, government has kept insisting that it can only pay 11% for officers on grade level 07 – 14 and 6.5% consequential wage increase to public workers for officers on level 15-17;

Since the last national minimum wage of N18,000, workers have been forced to suffer huge inflation and astronomical hike in the prices of essential goods and services. The following examples would suffice;

The nonchalant attitude of the government negotiating side has dragged negotiations for consequential wages adjustment unduly. Nigerian workers have exercised tremendous patience and restraint already.
At the end of our deliberation, the leadership of organized labour in Nigeria resolved as follows;

We demand the reconvening of the meeting of the committee negotiating the consequential adjustment with a view to concluding the process that started on the 28th of May, 2019 within one week;

Commence immediate implementation of the signed agreement on consequential adjustment of public workers’ salaries with effect from 18th of April 2019 when the new national minimum wage of N30,000 per month was signed into law.

In conclusion, the leadership of organized labour in Nigeria wishes to categorically state that the leadership of labour cannot guarantee industrial peace and harmony in the country if our demands are not met at the close of work on Wednesday, 16th October, 2019.