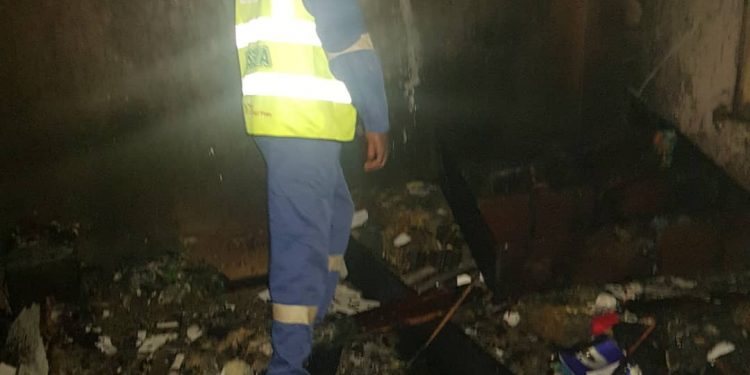 A two-year-old boy identified as Praise Emeka was at the weekend burnt to death after fire razed their apartment at Ikotun, a Lagos suburb.

The kid’s pregnant mother was said to have collapsed and his older sibling injured in the inferno said to have been caused by unattended candle light.

The incident occurred on Friday night at 4, Ben Okonkwo Street, off Governor Road in Ikotun, a storey-building with eight mini flats.

According to sources, the woman allegedly lit candle for her three children during power outage and went out.

It was however not clear if the children were playing with the lit candle causing it to fall and engulf the flat.

Before the woman’s return, it was gathered that the last of her three children had been burnt beyond recognition while another one sustained fire burns.

There were fears that the woman might have inhaled fumes as well as suffered trauma occasioned by the death of her child.

The Nation gathered that she was rushed to a nearby hospital by eyewitnesses before the arrival of emergency workers.

According to the Lagos State Emergency Management Agency (LASEMA), quick response by emergency responders and policemen saved the day as the fire was prevented from escalating to other flats.

LASEMA’s Chief Executive Officer (CEO) Dr. Femi Oke-Osayintolu said the police would conduct investigation to ascertain the cause of the incident.

Spokesman for the Lagos Police Command Bala Elkana, a Deputy Superintendent (DSP), confirmed the incident, adding that the value of razed properties was yet to be ascertained.

“The combined efforts of the Police and fire service led to the rescue of other occupants of the building and prevented the fire from escalating. Investigation is ongoing to ascertain the cause of the incident,” said Elkana.