TWO MEN FOUND WITH A MAN’S SKULL IN OGUN STATE. 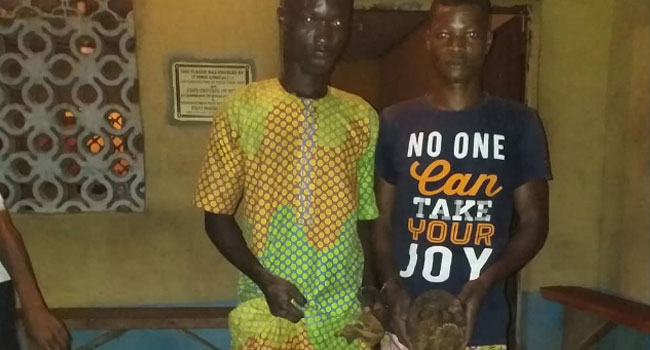 The Ogun state police command says it has arrested two men who were allegedly in possession of human skull along Ijoun road within Ipokia local government of the state.

According to a press statement by the police public relations officer, DSP, Abimbola Oyeyemi ,the two suspects were arrested following a complaint lodged by a resident of the area who reported that the two suspects were sighted at a cemetery where his mother was buried few months ago.

“The suspects were reported to be digging the grave of the mother of the complainant and that he suspects them to be up to something evil. ” he said.

“Upon his report, the DPO Eggua division SP Kehinde Oyekangun quickly mobilized his men and moved to the scene but met the two men along the road. They were promptly accosted, and on searching the bag they carried, the skull of a woman was discovered there in.”

“The complainant identified the skull to be that of his mother.
On interrogation, the two suspects confessed to the commission of the crime, they admitted that they intended to use the skull for money making ritual. ”

“Meanwhile, the commissioner of police cp Bashir makama has ordered the immediate transfer of the suspects to state criminal investigation and intelligence department for further investigation and prosecution.