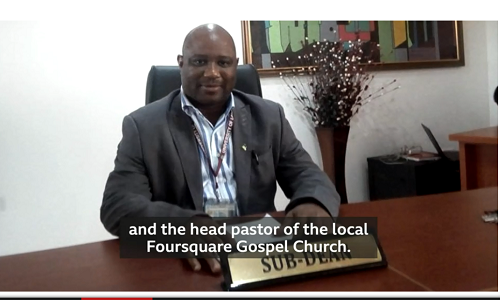 Two Nigerian University lecturers from one of Nigeria’s leading universities – the University of Lagos have been exposed in the sex-for-grade scandal as revealed by BBC Africa Eye team.

A 52-minutes long documentary featured four lecturers from two of West Africa’s leading universities – UNILAG and the University of Ghana.

The documentary exposed the atrocities committed by lecturers and how female students – those struggling with studies, seeking admission or in search of mentors are being exploited and harassed sexually.

Dr. Boniface Igbenegbu, a senior lecturer in the Faculty of Arts of the University of Lagos, and a head pastor of Foursquare Gospel Church were caught trying to sexually harass the undercover reporter who posed as a 17-year-old girl seeking admission into the university.

Dr. Igbenegbu first offered himself as a spiritual and academic mentor to the undercover reporter. But on other subsequent meetings, he made sexual advances towards the reporter into engaging in sexual acts with him.

He also revealed how lecturers take female students to the university’s Senior Staff Club, nicknamed the ‘Cold Room’ to commit all manner of sexual atrocities.

Another lecturer, Samuel Oladipo of the Economics department of the University of Lagos who was not specifically targeted by the BBC Africa Eye team, approached the reporter, Kiki Mordi, while the team was reporting on the university campus, and made sexual advances towards her with the promise of helping her with her studies

At the University of Ghana, Ransford Gyampo, promised to help the undercover journalist with her postgraduate studies and national service.

He promised to marry her. He took her to a mall, where he bought her shoes and asked her if she has been “violently kissed” before.

Also, Paul Butakor, another lecturer in the College of Education, University of Ghana, repeatedly begged the undercover reporter to allow him to be her “side guy”. He told her that his wife was out of the country. He said if men could have “side chicks,” then a lady could have a side guy.

Ms Mordi, the lead reporter of the documentary, who herself had suffered sexual harassment disclosed that she was forced to quit her undergraduate studies after unfortunate incident as she could no longer bear the trauma.

The BBC Africa Eye team comprising Kiki mordi, Kemi Alabi and Charlie Northcott began the investigations into the #SexforGrades as far back as November 2017.

In exposing these lecturers, the BBC Africa Eye team made use of undercover reporters posing as students, with revelations of how female students are blackmailed and sexually harassed by male lecturers in exchange for better grades and mentorship.