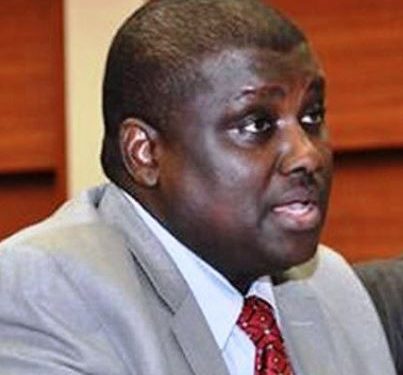 FUGITIVE ex-Chairman of the Pension Reform Task Team Alhaji Abdulrasheed Maina was arrested by Security Operatives, following the issuance of a warrant of arrest by an Abuja Magistrate’s Court, it was learnt on Sunday.

His arrest by the operatives of the Department of State Service (DSS) was also preceded by a decision of the Court of Appeal, which knocked off the legal hurdles he had created against his arrest.

Maina, who has been on the wanted list of the Economic and Financial Crimes Commission (EFCC) for about four years, was arrested last week at a hotel in Abuja, after he allegedly sneaked into the country from his base in Dubai, United Arab Emirates.

DSS’ spokesman Peter Afunanya said in a statement that Maina was arrested at the Pennsylvania Avenue Hotel, Utako, Abuja on September 30.

Upon his alleged refusal to honour its invitation in 2017, the EFCC had applied to a Magistrate Court of the Federal Capital Territory (FCT) for an arrest warrant, which the court issued, directing all relevant security agencies to apprehend him and deposit him with the commission.

Before the bench warrant could be executed, Maina went before both the Abuja and Kaduna divisions of the Federal High Court to query the propriety of the order for his arrest and the legality of the EFCC (Establishment) Act, 2004.

The suit he filed before the Abuja division of the court had  the Attorney-General of the Federation (AGF), the EFCC, the Inspector-General of Police (IGP), the Commissioner of Police (Interpol) and the Nigerian Immigration Service (NIS) as respondents.

His suit before the Kaduna division had the EFCC, the AGF, the Senate President and the Speaker of the House of Representatives as respondents.

In a judgment on March 28 at the Kaduna division of the FHC, the court upheld the respondents’ objection to the competence of the suit and dismissed it.

Justice S. M. Shuaibu, in the judgment, held among others, that the suit constituted an abuse of the judicial process (in view of the pendency of a similar suit before the Abuja division).

Justice Shuaibu dismissed the suit, after considering the suit on the merit, that it was unmeritious and that the plaintiff failed to prove it.

Unsatisfied, Maina, who appealed before the Kaduna division of the Court of Appeal, prayed the appellate court, to among others, set aside the decision of the Federal High Court.

In its judgment on August 2, the Court of Appeal dismissed his appeal and held that it was without merit.

In the lead judgment by Justice James Abundaga, the court resolved the two issues identified for determination in the appeal against Maina.

The first issue was whether the trial court was right to have held that the suit constituted an abuse of court process, declined jurisdiction and dismissed it.

Justice Abundaga, after comparing both suits, held that they were targeted at the same goal; to frustrate the execution of the bench warrant issued against the plaintiff (Maina) by a Magistrate Court in the FCT, upon an application by the EFCC.

He noted: “The plaintiff/appellant cannot pull a wool over the eyes of the court. It is manifest that the intention of the plaintiff, in making the 3rd and 4th defendants (the Senate President and House of Reps Speaker) parties, and to ask for nullification of the EFCC Act 2004, on which basis the plaintiff is sought to be arrested, is to knock off the substratum upon which the intended arrest of the plaintiff rests.

“If it were otherwise, since he is already challenging the warrant of arrest issued against him, in the suit at Abuja, why is he asking for the same reliefs in the suit in Kaduna again?

“The whole idea, I think, is to cause confusion and frustrate the execution of the warrant of arrest.

“This is where, I think again, the plaintiff is interfering with due administration of justice through the improper use of judicial process.

“The concept of judicial process frowns at the practice of a party splitting, into piece meal, a cause or causes of action that can be maintained in one suit and litigating them all over the place to send his opponent running all over to defend those suits.

“The synopsis of all I have been saying is that the plaintiff’s suit constitutes an abuse of court process. Therefore, the lower court was not in error in so holding.”

The second issue related to whether the trial court was right to have held that Maina failed to discharge the burden of proof placed on him by the law.

Also, Justice Abundaga affirmed the decision by Justice Shuaibu on the issue and held that Maina failed to provide the necessary evidence to ground his case.

Justice Abundaga said: “The court, taking judicial notice of the laws, including the EFCC (Esatablishment) Act 2004 placed, on the plaintiff/appellant, a heavier burden to prove that the Act, was not legislated and passed into law by the National Assembly.

“The appellant, I must say, failed to discharge that burden and the lower court rightly so found and dismissed the claims.

“It is, therefore, with ease and complete satisfaction that I resolve issue two also, in favour of the respondents and against the appellant.

“The appeal is, therefore, totally lacking in merit and it is hereby dismissed. In consequence, the judgment of the lower court is affirmed.

“The first, second and third respondents (EFCC, AGF and Senate President) are entitled to costs, which I hereby assess at N100,000 each in their favour,” Justice Abundaga said.

It could not be ascertained, as at the time of writing this report, whether or not Maina has appealed to the Supreme Court.