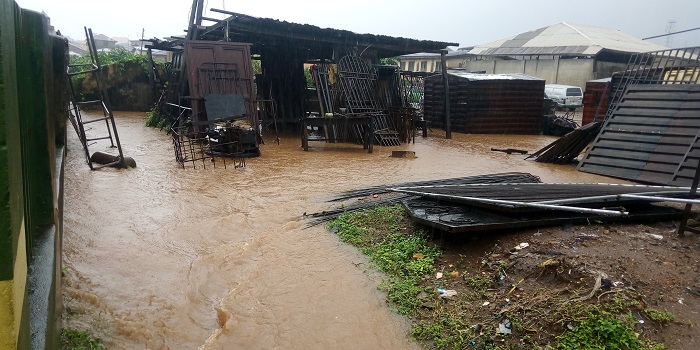 Many residents of Ado Ekiti, the state capital have been thrown into utter misery as a downpour that lasted about 11 hours wreaked havoc on different parts of the metropolis.

The downpour, which fell intermittently began around 2:45pm on Monday and lasted until 12:15 noon on Tuesday, rendering many homeless with valuables worth several millions destroyed.

Many residents of the state capital could not go about their daily businesses as a result of flood that accompanied the heavy rainfall.

The development led to hours of gridlock on the always busy Ado-Ijan-Ikare Akoko as the Ureje bridge was completely submerged.

Many motorists coming into Ado Ekiti were held within the highways, waiting for the water level to recede before they could use the road.

The torrential rains forced many residents to stay indoors, while others, who took the risk to leave their houses, got stuck.

An artificial border was created because motorists conveying passengers to either Ijan Ekiti/ABUAD/ Federal poly or Ado Ekiti discharged their passengers for vehicles at the other end and returned to base.

The water level on the major roads was knee-high as pedestrians struggled to wade through the flood.

The Nation gathered that the flood swept many vehicles, several meters away, from where they were parked.

At different affected areas visited by our correspondents, residents were seen trying to remove water from their apartments and shops while counting their losses.

A victim, Mr. Omoboriowo Abdullateef, disclosed that all what he had painstakingly laboured for had gone down the drain.

“I was in the office when my wife telephone to inform him that their apartment had been overtaken by flood.

“I quickly rushed home after the rain had ceased, only to discover that my property had been soaked and some destroyed. This is pathetic I don’t know what to do because I am now hopeless”, he said.

Another victim, Jegede Michael, whose residence was flooded for the second time, said his properties were washed off including vital documents by the ravaged flood.

They, however, appealed to the governments and public-spirited individuals to come to their aid, saying the degree of damage done was beyond their individual capabilities.