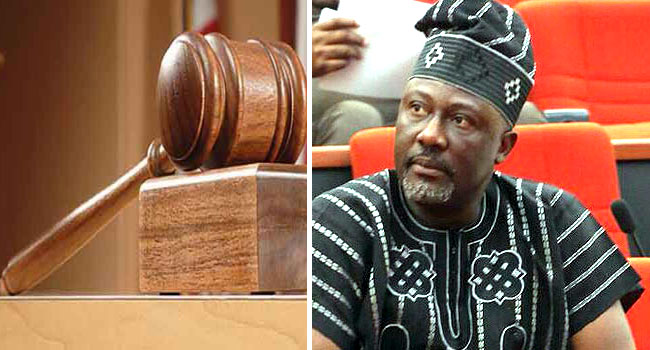 The Court of Appeal in Abuja has dismissed an application filed by Senator Dino Melaye, the lawmaker representing Kogi West senatorial district in the National Assembly.

Senator Melaye in the suit challenged the judgment of the Kogi State National Assembly Election Petitions Tribunal which nullified his election and ordered a fresh election.

However, a three-man panel of the appeal court led by Justice Datti Yahaya dismissed the application in a unanimous judgment on Friday.

The court held that the lawmaker could not proof the allegations that he was not given a fair hearing by the lower Tribunal.

It, therefore, upheld the majority judgment of the Tribunal that the petitioner, Senator Smart Adeyemi, proved the allegations of malpractices, mutilation of result sheet, and over-voting.

As such, it ordered the Independent National Electoral Commission (INEC) to conduct a fresh election in the district within 90 days from October 11, 2019.

Senator Melaye contested the election on the platform of the Peoples Democratic Party (PDP) while Senator Adeyemi was the candidate of the All Progressives Congress (APC).

The court had reserved judgments in three separate appeals brought before it on the Kogi West Senatorial District election.

The appeals were file by the PDP, INEC, and Senator Melaye, with the three of them praying the appellate court to set aside the majority decision of the Tribunal which voided the election of the lawmaker.

In his final argument, a Senior Advocate of Nigeria (SAN), Jubrin Okutepa, who represented the PDP, prayed the appeal court to set aside the majority decision of the Tribunal against Melaye on the ground of denial of fair hearing and refusal to evaluate evidence adduced during the hearing.