Posted on October 15, 2019 by bestiaresgladiators 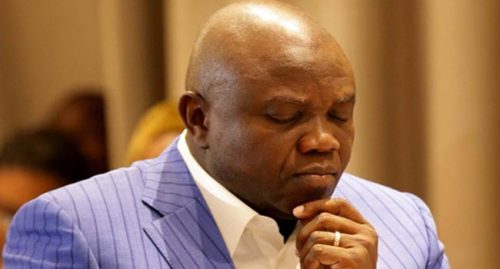 Immediate Lagos Governor Akinwunmi Ambode on Tuesday failed again to appear before the House of Assembly ad-hoc Committee probing the activities of the last administration, especially the purchase of 820 buses for mass transit.

The 16-man committee is chaired by Hon. Fatai Mojeed.

Also absent was the immediate past Commissioners for Finance, Akinyemi Ashade and Special duties Oladejo Seye.

They however wrote to be excused, claiming to be outside the country.

The next option, according to Speaker Mudasiru Obasa when the matter appeared at plenary, is to send Ambode’s invitation publicly through newspaper publications.

He vowed if the ex-governor fails to appear after then, the House would issue a warrant for his arrest.

Most of the ex- commissioners stated the former Governor carried out major activities without their knowledge, claiming to be mere figureheads.

Former Commissioner for Economic Planning and Budget Olusegun Banjo revealed that the purchase of the 820 buses by Ambode “was not rooted through its ministry.”

Banjo, who stated that he became commissioner in February 2018, said he followed the system he met on ground, which according to him was responsible for shady transactions on the buses that were procured.

“The way the ministry is structured, it did not allow us to function well.

“The N24 billion did not come to my ministry. We didn’t have a running system.

“As a commissioner, I could not approve one naira. All the MDAs approached the Governor directly.”

He pointed out that the way the operation went during the last administration, “a lot of things could be done without the knowledge of the commissioners. It was not transparent.”

On unbudgeted funds, he said: “I don’t know what happens to unbudgeted funds when it comes because the ministry of finance does not inform my ministry, we don’t have a running system”.

He however said that he would make available his handing over notes where he identified the lapses in the system and ways to address them.

When the Accountant-General of the State, Mrs. Shukrat Umar was asked if the budget for the purchase of the buses was approved by the State Executive Council, she said: “The State Treasury Office acted on exco approval.

“The buses were in line with Exco’s approval. I would not know whether the Paris Refund Club was discussed or not.”

The Committee alleged the Imota rice mill, light-up Lagos project and procurement of LASEMA Rapid Response equipment and engagement of the consultants were done under shady circumstances as revealed by the heads of the MDAs during questioning.

All the projects, including the Oshodi interchange, it was also discovered were never captured in the budget, the committee stated according to former Commissioners Toyin Suarau(Agriculture) and Wale Oluwo(Energy).