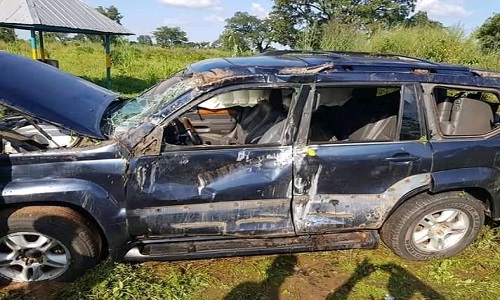 A chieftain of the All Progressive Congress (APC) in Benue State, Professor Eugene Aliegba on Friday survived an auto accident.

The accident happened along Lafia-Makurdi federal highway around Daudu village in Benue State.

Information gathered that he was travelling home from Keffi, Nassarawa state to Benue, to attend a burial ceremony of one of his associates.

An eyewitness, James Ornguga, said Aliegba’s car somersaulted several times, leaving him in trauma as he was pulled out of his wrecked Toyota Sport Utility Vehicle through the front glasses.
ALSO READ: SISTER BEAT YOUNGER SISTER TO DEATH FOR BEDWETTING

He was on admission at undisclosed hospital in Makurdi receiving treatment.

He was a governorship aspirant twice on People’s Democratic Party ( PDP) platform.

He joined APC during the 2019 election and was appointed key member of Jime – Ode campaign council.