NDUME SAID BOKO ELEMENT ARE IN ONLY THREE LOCATIONS NOW 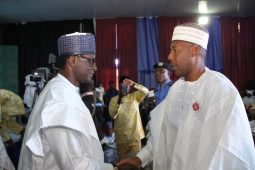 Chairman Senate Committee on Army Ali Ndume has said that the Boko elements in the northeast are only left in three locations.

Ndume, who spoke at the one- day Northeast Security Summit convened by the Inspector General of Police Mohammed Adamu Abubakar, disclosed that the insurgents are hibernating in the Lake Chad fringes, the Mandara Mountains and the Sambisa Forests.

“We know that the key remaining location of the remaining insurgents is three, the Lake Chad fringes, the Mandara Mountains and the Sambisa Forest and with the current technology, the theatre commander said the last time that with three months they can finish this war,” Ndume said.

Ndume, one of the prominent senators from Borno who represented the Senate President Ahmed Lawan at the summit, also regretted the poor budgetary provisions for security.

He stated that the fight cannot be won with the conventional army tactics, meagre budgetary allocations and inadequate personnel by the army and the police in the country.

“The army is doing well but it’s not enough because we have not seeing the end of it. Let me say that we cannot fight a war on this vast land that we have with only 150, 000 soldiers.

”We cannot also police with what is budgeted for this year with the police. The constitution say the security and welfare lives of the people is paramount. How can you therefore be have meagre budgetary allocation for the police and a meagre N100 billion for the military.”

Ndume also urged the North-East Development Commission (NEDC) headed by Alhaji Mohammed Alkali to expend its N35 billion budget before the end of the year, warning the commission will have to lose the money with the present TSA system of the Federal Government.

He called on the Commission to lease with Borno Government and spend the money on the displaced people that who want to return to their communities and also provide money for them to start a new life.