Posted on November 11, 2019 by bestiaresgladiators 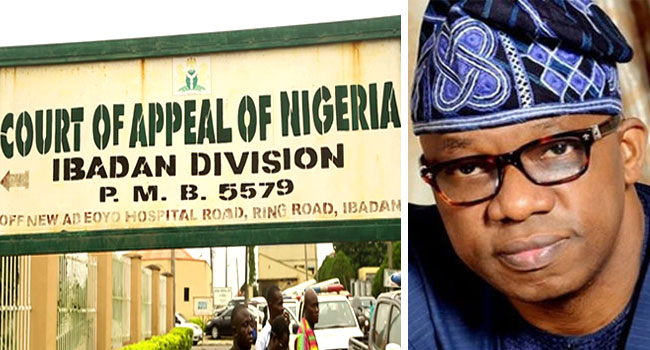 Ogun State Governor, Dapo Abiodun, has won the case challenging his election at the Court of Appeal.

This comes as the appeal court sitting in Ibadan, the Oyo State capital affirmed the victory of the candidate of the All Progressive Congress (APC) in the Ogun State governorship election held on March 9.

The court upheld the judgement of the Governorship Election Petitions Tribunal which validated Abiodun’s victory and set aside the appeal filed by the candidate of the Allied People’s Movement (APM), Adekunle Akinlade.

A four-man appeal panel of justices had on November 4 reserved its ruling on the two appeals after counsels had adopted their written addresses.

At Monday’s sitting, the appellate court upheld the election of Mr Abiodun as declared by the Independent National Electoral Commission (INEC) in the unanimous judgment delivered by Justice Mohammed Ambi-Usi Danjuma, who stood in for the head of the panel, Justice Abubakar Yahyah.

It dismissed the appeal filed by Mr Akinlade for lack of merit, saying Governor Abiodun won the poll having secured the highest number of lawful votes cast.

Shortly after the judgement was delivered, the APC in Ogun commended the decision of the appellate court through its publicity secretary, Tunde Oladunjoye.

Oladunjoye spoke at a press conference held at the party’s secretariat in Abeokuta, the Ogun State capital.

According to him, the party is extending a hand of fellowship to members of opposition parties to join hands in building the state’s economy.

The APC publicity secretary attributed the victory at the appeal court to God, as well as the support and understanding of the residents of the state.

He called for more cooperation and a better understanding of the Dapo Abiodun administration’s policies and programmes.

Oladunjoye gave assurance that the party would ensure an inclusive government, saying Governor Abiodun would not betray the confidence reposed in him by the people of Ogun