PDP AS THE ZEAL AND CONFIDENCE TO SAVE NIGERIA 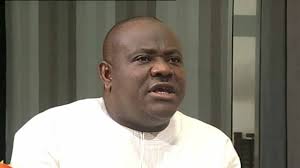 He stated this on Monday during the commissioning of Rumuji-Ibaa-Obele-Isiokpo road in Emohua Local Government Area of the state.

“This is a party that Nigerians have seen, Rivers State has seen that we have the confidence, we have the commitment to save Nigeria,” he said.

“Let them tell us what they have done for Rivers State. I hear they want to flag off railway gauge to Maiduguri. Is that what we need? That is not our project. You want to build Bonny Deep Sea, for how many years?”

The governor called on the people of the state not to be deceived by politicians anymore, noting that many political elites make promises just to woo the masses into joining their parties.

According to Wike, politicians must be held accountable for their actions and promises made during the electioneering period.

“It is not just to make promises in order to attract people.  Make promises and fulfil it. The time has come that we must hold politicians responsible.

“We must hold them accountable for whatever they tell us. It is not when they tell you story finish, after voting they abandon you.”

Wike’s comments come two days after he said the construction of eight flyover bridges in Port Harcourt alongside other critical infrastructure is a mark of appreciation to Rivers people who steadfastly resisted attempts to use the Army and other security agencies to rig his government out of power in 2019.